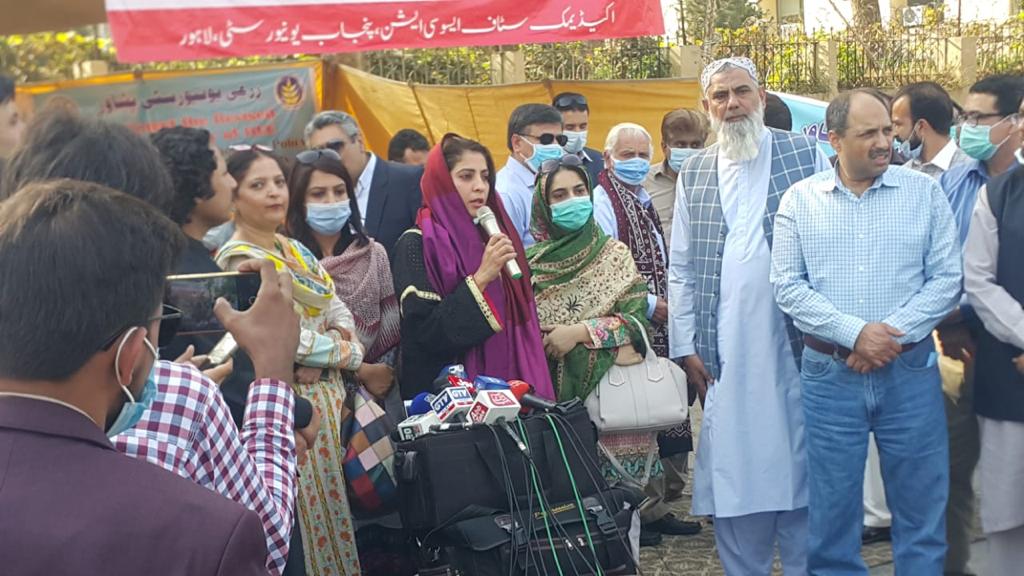 ISLAMABAD: FAPUASA protest sit-in outside HEC secretariate continued for the second day on Thursday where teaching community across Pakistan showed severe resentment over the behaviour of HEC Chairman for not addressing the legitimate demands of FAPUASA.
On the second day, Senator and Ameer Jamat e Islami i Siraj Ul Haq came to show solidarity with the academia and stressed the government to resolve the issues immediately in the best interest of academia.
Senator Farhat Ullah Babar of PPP and Madam Kishwar, member of parliament from MQM, also visited the sit-in and showed their utter disappointment over the failure of the government in addressing issues of Academic elite of the country. Several members from civil society also showed solidarity with FAPUASA.
FAPUASA  Central President Dr Sohail Yousaf in his address said their struggle was for the future of higher education in Pakistan and to cease the brain-drain that is being caused by ill-intended policies of HEC. He said their protest and sit-in will continue until all demands of FAPUASA are addressed positively. Kaleem Bareach, Secretary-General of the Federation and Dr. Mumtaz Anwar Ch, President Punjab Chapter were also present there.

ISLAMABAD: All Pakistan Tenure Track Faculty Association (APTTA) has announced support and decided to join the ongoing protest of FAPUASA. This decision was announced by President APTTA Dr. Khurram Shehzad Ahmad and General Secretary Dr Qazi M. Zaigham Zia at the protest venue in front of HEC in Islamabad.
The decision came as a reaction to no response to APTTA’s email regarding reservations on HEC’s recent notifications that it issued after APTTA’s protest and HEC Chairman’s allegation that it has resolved all the issues of TTS faculty. Other representatives from APTTA including an executive member, information secretary and finance secretary were also present at the protest venue.
It was unanimously agreed to make combined efforts against the HEC’s policies and irresponsible behaviour causing  damages not only to the faculty but also the state of higher education in the country.
Both the presidents appealed the government to take notice of the continuously deteriorating situation and ensure immediate corrective measures against those responsible in the HEC. 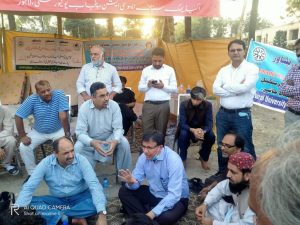 The old policy of accumulative 10 years and 15 years for promotion to associate professors and professors, respectively, irrespective of post PhD experience should be continued for at least next five years. The said point was already agreed with Executive Director, HEC in a meeting with FAPUASA on August 20, 2020. In this regard, the data of aggrieved faculty members due to new post PhD experience policy from universities across Pakistan has already been collected by HEC. An immediate notification should be issued in this respect.

The new journal policy has been launched by HEC from July 1, 2020 without consultation of actual stakeholders of academia. It is demanded to immediately withdraw new journal policy. Academia must be taken on board before finalizing the new policy till then old policy should remain intact. It is pertinent to mention that the old journal policy is globally accepted.

The new admission policy (both for graduate and undergraduate) has been proposed by HEC where universities have been directed to adopt new policy from Spring 2021 but not later than Fall 2021. The said policy has not been deliberated thoroughly with universities/academia. Any modification or revamping of admission policy without thorough consultation with actual stakeholders will prove to be disastrous. The said policy must be deferred till further consultation with academia.

Hundreds of endorsement cases of TTS faculty are either pending with HEC or reverted back to university for one reason or another. The delays/lapses are mainly on the part of universities administration or HEC. All existing pending cases of endorsement must be endorsed with one-time exemption thereby ensuring due date promotions of TTS faculty. Also, early tenure should be allowed once in a career irrespective of cadres subject to fulfilling e to eligibility criteria to existing faculty.

Recent notification regarding administrative posts for TTS faculty must be re-notified by incorporating provision that it will be effective “retrospectively” in order to eradicate previous anomalies created due to mismanagement of either universities or HEC.

FAPUASA being the elected stakeholder of academia must be given true representation in all policy-making forums.  Policy maters related to research, academics, funding, autonomy and quality of higher education should be addressed in consultation with stakeholders.