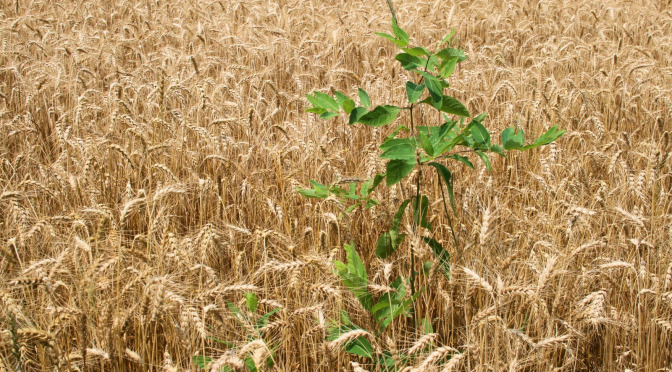 ISLAMABAD, April 18, 2019: Wheat weeds have remained a serious issue for the farmers community of Pakistan – an agricultural country – where per acre yield increase was a great task. Now a cost-effective technology has been developed by University of Agriculture, Faisalabad and Jaffer Agro Services (Private) Limited for application of bioherbicide to control weeds of wheat. This project was approved and undertaken under Technology Development Fund (TDF) of the Higher Education Commission (HEC).

The project entitled “Development of Bioherbicide Containing Allelopathic Bacteria for Biocontrol of Weeds of Wheat” was awarded to Dr. Zahir Ahmed Zahir and his team at the Institute of Soil and Environmental Sciences, University of Agriculture Faisalabad (UAF) along with Jaffer Agro Services (Private) Limited.

The team has already identified useful strains of rhizobacteria, a root-colonising bacteria suitable to develop a bioherbicide, which may be applied to wheat crop through the technology and a specified process. The team is also fostering to offer it to farmer community in a user-friendly form.

Wheat is Pakistan’s major crop and, unfortunately, its annual production is witnessing 24 per cent decrease annually by weeds causing Rs.37.9 billion loss to the country’ economy. Various weed control strategies are being employed, including manual weed control, which on one side is time consuming and labour intensive, while on the other side is suitable only for crops grown in rows, besides causing crop injury and elevating the cost due to high energy inputs. Chemical control is time-saving and cost-effective, but it causes harmful environmental impacts, destroying beneficial organisms, pollinators, terrestrial and aquatic life in different ways.

Field trials of the technology conducted in collaboration with the industrial partner have already proven its ability to suppress weed growth and promoted wheat growth by more than 15 per cent. It is estimated to increase 567 tons of wheat crop yield worth Rs.18.44 million annually by applying bioherbicide to only 15 per cent of total area under wheat cultivation. Moreover, along with other multiple benefits to biodiversity, ecosystem and economy of the country, three million rupees can be saved from import of harmful insecticides and pesticides.

The project after successful completion may not only save import costs but establish ways to fulfil the objectives of multilateral environmental UN agreements to which Pakistan is signatory and empower the ambition of knowledge economy.

TDF is the first initiative of its kind by HEC to harness the expertise of academic scientists for commercially viable prototype and product development with inbuilt mechanism to have industry partner.