ISLAMABAD (January 25, 2023): The Higher Education Commission (HEC), in collaboration with the University of Lahore (UoL) organised an international seminar on ‘Pakistan’s Growing Global Impact: A Data Masterclass by the Times Higher Education (THE)’ for the public and private sector universities of Pakistan at the HEC Secretariat on Wednesday.

Representatives of universities from different parts of the country took keen interest in the explanations of parameters and standards set by THE in the global rankings. The event focused on ‘THE World University Ranking’ and other rankings relevant to the region.

Chairman HEC Dr. Mukhtar Ahmed opened the event with his welcome address. He delivered a presentation on the National Ranking Standards and Mechanisms. “During the last two decades, HEC has done pretty good in the higher education sector, and I am confident that if our universities learn from this opportunity and position themselves accordingly by showcasing their achievements, the global landscape of top universities will include many Pakistani institutes,” the Chairman said. 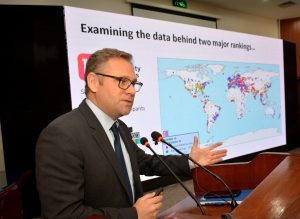 Mr. Baty also provided an exclusive analysis of Pakistan’s performance across THE’s flagship global rankings, the prestigious THE World University Rankings, and the pioneering THE Impact Rankings, along with the country’s current worldwide status.

“Pakistan is making rapid progress. In fact, it is matching China in its pace of improvement. The key qualities of Pakistani universities are citations, quality of research as opposed to volume of research and above all, doing it without adequate funding,” Batty shared, adding that despite all these factors, Pakistan has not achieved the international reputation it deserves because only doing is not enough. “You need to present your achievements and send us more and more data, and I am willing to help and guide the universities that struggle with this part.”

Times Higher Education (THE) is the company behind world’s most influential university ranking, with almost five decades of experience as a source of analysis and insight on higher education. Its ranking has been the gold standard for global, research-intensive universities for 15 years and spans the world with over 25 million annual users.