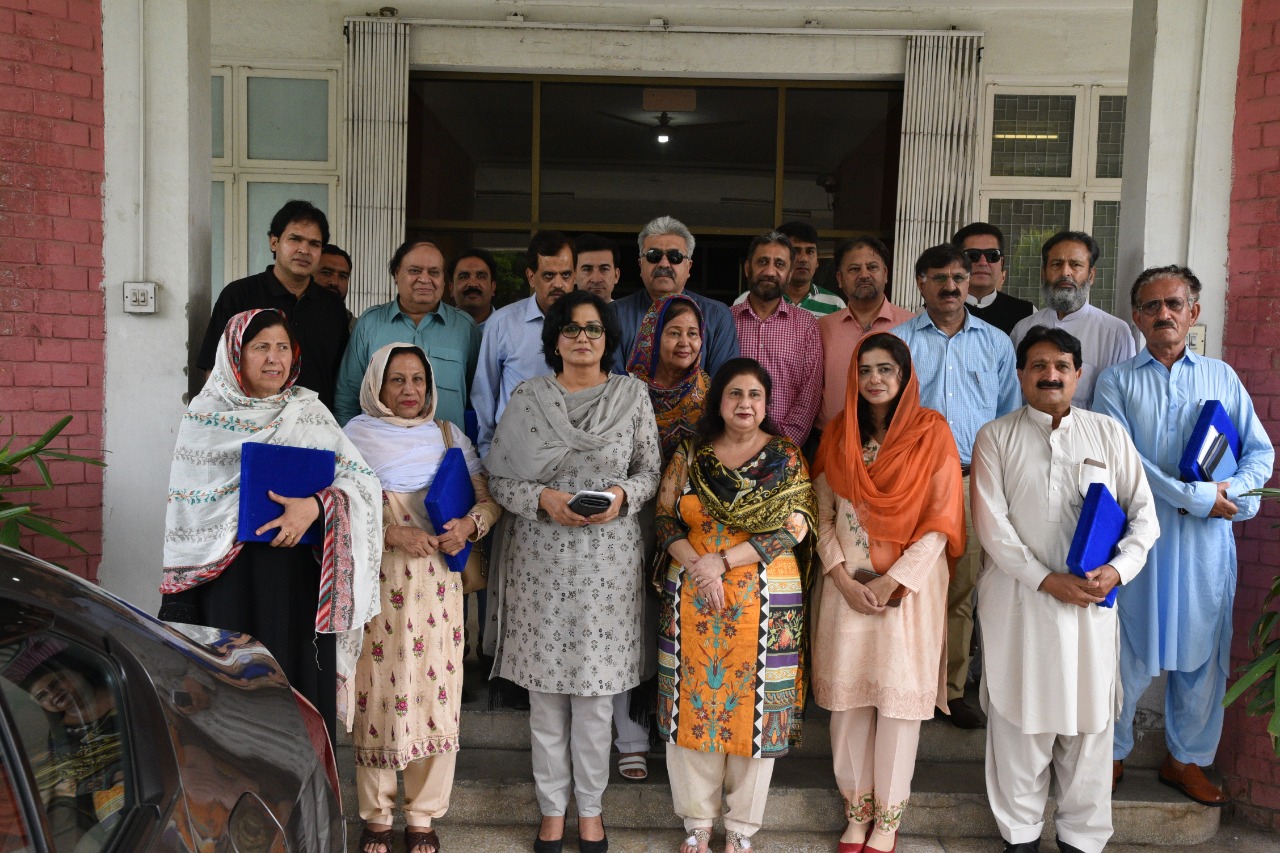 LAHORE (12 July, Friday): A 12 member of delegation from Khyber Pakhtunkhwa (KPK) comprising professors, poets and journalists visited Punjab University as part of their culture exchange tour to Punjab province on a special invitation of Government of Punjab through Punjab Institute of Language, Art and Culture (PILAC).

Speaking on this occasion PU Vice Chancellor Prof. Dr. Niaz Ahmad Akhtar said that inter-provincial exchange visits should be organized regularly because these help bridge the distance and promote nationalism among all Pakistanis. He ensured his all-out cooperation to continue and increased such cultural exchange visits. The vice chancellor paid special thanks to PILAC DG Dr. Sughra Sadaf and PU PVC Dr. Saleem Mazhar for making this exchange visit all a success.

During the discussion issues related to national and local languages were pondered upon at a length and the dialogue participants emphasized that Urdu should be officially recognized and given due importance as the language of communication in Pakistan as per the vision of Quaid i Azam Muhammad Ali Jinnah while regional and local languages should not be crushed rather protected and promoted in a way that more words are added to Urdu dictionary from local and regional languages.

Dr. Shabbir Sarwar Asked the KPK delegates that why Taliban and other extremist targeted schools, especially girl schools and what role KPK intellectuals, poets and academia played to changed their mindset.

Dr. Abaseen Yousafzai said terrorists need headcounts, more are better for them and children are an easy target.

PU media studies assistant professor Dr. Waqar Malik argued that there should be uniform education system in the country. He believed that unless and until there is no single system of education, nationalism cannot be promoted as the students of a seminary and the students of ‘O &’A’ cannot sit together due to cultural differences. Dr. Abaseen supported the significance of uniform education system.

However, Dr. Amjid Saleem from Peshawar University English Department, said that diversity was very important and choices of people should not be suppressed in the name of unification. He said diversity and different cultures together promote nationalism.

Dr. Muhammad Saleem Mazhar, PU pro vice chancellor and Dean Oriental Learning, seconded the idea while saying that Tannawwoo or diversity was very significant in nations as this reflect different colour of the nation like colorful flowers in a garden. On the other hand, monotony creates dullness and ugliness.

Mr. Rohan Yousafzai from Express News Peshawar, argued that distorted and incorrect history has been made part of the educational curriculum. The government and academia must take corrective measures because connection to history is important for better present and future.

Prof. Dr. Zahid Munir Aamer, Chairman Urdu Department at Punjab University, said history is important to study and no one stops people to study true version of the available history accounts. He said Urdu language has not been given its due status. He supported the idea of protecting and promoting regional languages while recognizing them as national languages. He said all human being are from one father and mother, Adam and Eve, the provinces and regions are just for recorgnition and identification as mentioned in Holy Quran that tribes are for identity.

Dr. Noshina Saleem, the in-charge director of PU ICS, argued that national media was not highlighting the provincial and regional cultures in a true representative manner. She said PTV used to give time to all provinces and all regions of the country depicting their cultural identities. She elaborated her point that there should be a national policy of our national media to promote nationalism.

Dr. Sughra Sadaf said this cultural exchange visit was proving extremely beneficial for both sides as it was proving people from both the provinces to interact and build bridges.

To a query, the KPK delegation informed the Punjabis that tourism industry has once against started flourishing in their province in the wake of peace and better security conditions. They said that areas of Kalam, Bahreen, Malam Jabba, Khamrat and Mohodant were worth visiting and re-explored.