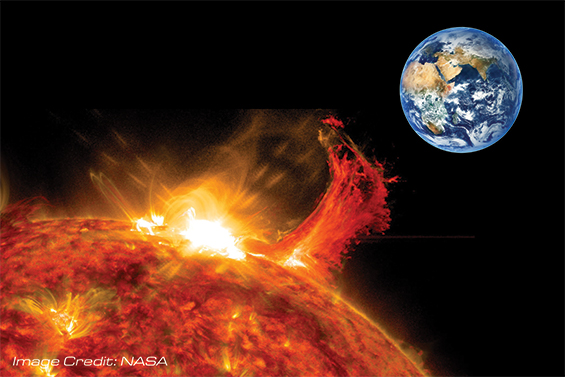 The Carrington Event was witnessed in Queensland, Australia from August 28 till September 2, 1859.

The year 1989 witnessed yet another geomagnetic storm; the day was March 13, when the Quebec, province of Canada witnessed a blackout day, which is called Quebec Blackout.

The science which is connected with planet earth encompasses geosciences or earth science among others. Containing old histories, this is considered as a part of planetary science while it possesses holistic and reductionist approaches in the science of the planet earth. This discipline can cope with lithosphere, atmosphere, biosphere or hydrosphere. Quantitative understanding has been developed by the scientists to understand the earth systems with the tools by mathematics, physics, chronology, biology, chemistry alike which help to know about how the earth is evolved.

According to a news release from NASA, coronal mass ejections caused by geomagnetic storms have been enhanced in strength; as from G1 to G5, they were rated G3 in 2012. The earth planet is surrounded and by bubbles of magnetic fields, while rapid changes in the earth magnetosphere was witnessed due to activities that happened on sun, which caused geomagnetic storm. With earth’s magnetic fields, coronal mass ejections were mingled; as a result, the storm became mild in intensity reported in the month of March in the corresponding year.

On the other hand, the geomagnetic storms have been intensified and enhanced in their frequency as magnetic fields of coronal mass ejections indulges with that of the earth that causes change of direction and leave more radiation and magnetic energy into the environment of the planet earth. Solar Hemispheric Observatory and Solar Terrestrial Relations Observatory models used by NASA have gathered more knowledge about the reported coronal mass ejections which were associated with flares that erupted in the same corresponding month. These flares crossed the speed of 1100 miles per second which according to the scientists may put effect on the environment of the earth and the mars as well. It was predicted that the coronal mass ejections or high speed stream (co-rotating interaction region leading edge when reach the earth may result in disruptions to power systems (grids), radio communications with high frequencies, and global positioning system. In the solar cycle, the largest and intense flares in the year 2012 were erupted by the sun. These were reported to be at x5.4 scientific ratings, which made them the second largest flares after the year 2011 which stood at x6.9.

This is considered as the 11-year solar cycle which is normal in circumstances. At this period, the occurrences on the surface of the sun are at their height. In the geomagnetic storm where coronal mass ejections are associated with that of the earth’s own; this conjunction dumps magnetic fields and solar particles into the atmosphere of the planet earth causing a geomagnetic storm. An aurora can be witnessed in such kind of storms which was seen in the year 2012, where the signaling system on earth was interrupted. With sunspot cycle, the intensity and frequency of the geomagnetic storm is bolsters and reduces.

This storm has three phases, first is initial phase which is also considered as storm sudden commencement. On the other hand, not every occurrence of the geomagnetic storm has the initial phase. Second phase is known as the main phase, its duration varies between estimated two to eight hours, while the third phase is known as recovery phase, which can have a time period from eight hours to seven days long. The magnetic field could be of south of north orientation, while in the southern and northern poles of the planet earth, auroras can be witnessed.

During the solar cycle, the Carrington Event or the solar storm of the year 1859 has been an example of a powerful geomagnetic storm when earth magnetosphere was collided with coronal mass ejections which caused the biggest reported geomagnetic storms ever. English astronomers Richard Hodgson and Richard Carrington recorded the white colored light flare that emerged in the solar photosphere. According to the experts, this type of intense solar storm with high magnitudes may cause widespread disorders in the modern civilizations. As far as the geomagnetic storm of the year 2012 is concerned, which was of same magnitude of the one reported in 1859; it did not struck with earth however it passed the orbit.

The Carrington Event was witnessed in Queensland, Australia from August 28 till September 2, 1859. The aurora was witnessed from poles of Hawaii and Cuba. Though these auroras were witnessed around the world, it was recorded by earth based magnetometers. This heavy and intense storm caused failure of telegraph systems in all North America and Europe. The people who were out at the time of occurrence of the storm viewed luminous clouds like hues with prism effects that looked gorgeous, brilliant and wonderful.

The year 1989 witnessed yet another geomagnetic storm; the day was March 13, when the Quebec, province of Canada witnessed a blackout day, which is called Quebec Blackout. This state suffered electric power blackout; though we witness many blackouts in other parts of the planet, yet this kind of occurrence was drastically changed as it was caused by the geomagnetic storm. The day was Friday when astronomers were encounters with an intense and huge explosion on the surface of the sun. In a matter of minutes, a billion tone gas could was released by the sun which was equal of the energy of thousands of nuclear bombs if they were exploded simultaneously. With the speed of a million miles an hour, the outburst was accompanied by solar flare caused short term interference in the radio signals that also jammed radio signals from Radio Free Europe into the Russia. Electrically charged particles’ gas hit the magnetic field of the planet earth; this geomagnetic storm superb lighting was witnessed by as far as Cuba and Florida.

The intensity of its magnitude was incredible. The North America was affected by the magnetic disturbance which created electrical charges beneath the north. This high intensity shock caused failure of the entire Quebec power grid stations. Millions of people found them in complete blackout and struck in the electric tubes/ tunnels for pedestrians, with stalled elevators. This all happened suddenly not exceeding two minutes.

The 12 hours long blackout caused closure of businesses, schools, markets and electric transport system. Over 200 power grids failures and problems were reported all across the United State, NASA also reported disturbance in the satellite operations during this geomagnetic storm, The Discovery, space shuttle, was also encountered with mysterious disorders.

In the United States, Lloyd’s of London and Atmospheric and Environmental Research (AER) scientists and researchers conducted a joint venture in the year 2013 to assess that if such a magnetic storm (Carrington Event type) hits the earth’s orbit, what would it cost the world especially the United States, which stood at 0.6 to 2.6 trillion dollars.  A storm of such a huge intensity that occurred in the year 1989 called ‘Quebec Blackout’ has become a historical lesson for the rest of the world, especially for the scientists and the electrical engineers. Fortunately, such kinds of high intensity and powerful geomagnetic storms are occurred rarely.

Writer Kalim ur Rahman is The Educationist Islamabad Bureau Chief. He can be contacted at: [email protected]