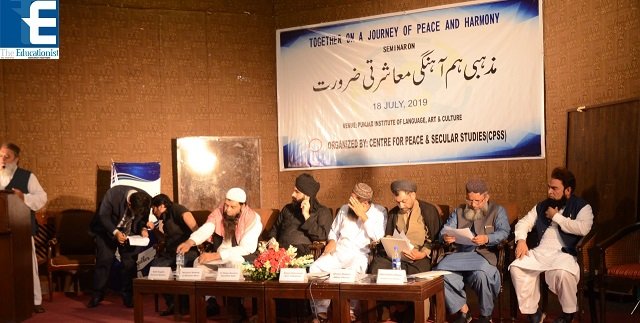 LAHORE (Thursday July 18, 2019): Religious scholars from different schools of thoughts, while sharing a stage in front of diverse audience, highlighted the importance of creating ways and means for peaceful society with inter-sect harmony and peaceful coexistence.

Addressing a seminar on “Inter-Sect Harmony”, held on Thursday at the Pakistan Institute for Language, Art & Culture (PILAC), the scholars called for unity among all on the basis of humanity and urged the promotion of acceptance, coexistence, reconciliation and progressive dialogue in order to counter extremism.

The seminar and panel discussion was moderated and facilitated by renowned anchor Awais Iqbal, who said that a tolerant society could ensure social inclusion by providing all citizens equal opportunities to grow without any discrimination of sect, faith or color. Mentors, working on peace narratives in Multan, also shared their success stories about how they ensured inter-sect harmony in their respective areas of South Punjab through various activities, focused on promoting co-existence, tolerance and harmony.

Addressing the seminar, Mufti Raghib Naeemi said that everyone will have to give each other a space and accept them with respect and tolerance. “We need to create a level of tolerance and acceptability and we should not sanction death for anyone on the basis of religious beliefs.” He said, adding that no other person should have the authority to preach or talk about religious beliefs of other sect.

Allama Asim Makhdoom said that there was a visible and positive change being witnessed among all sects as there was a great level of tolerance being seen and practiced in mosques. “We do have differences and they may remain. But there is a consensus on major points, which need to be prioritized,” he said.

At least 56 per cent Pakistanis follow their respective religious leaders, he said while quoting a report. “This makes it an important responsibility of religious leaders to play their role to transform the society and promote inter-sect harmony,” he said. On the occasion, Allama Ghulam Abbas Sherazi suggested that the religious schools need to work on their respective curriculum and reject intolerant behavior. Whenever fate was born, all the scholars met together against it.

“Our civil society needs to play its role in spreading the message on all domains. The media needs to promote peace and tolerance and there needs to be acceptability among all the sects,” he said. Also, Mahmood Ghaznavi said that there was a need to unite against hatred, intolerance and extremism. Muslims and Non Muslim Communities should be united because Pakistan is the fort of Islam but some political working is going against Islam. In this context, we should remain united and do not propagate hate on the basis of sects.

Pir Waqas Munawar said that it was important that all those who wanted to learn, should ask questions to the learned and the religious leaders of different sects. He said there can be differences between various schools of thoughts, but when it comes to Islam and Pakistan, ‘we are one and it is our religion that binds us together.’

On the occasion, audience mainly from different Islamic seminaries and universities asked questions to the panelists. At the end, Centre for Peace and Secular Studies (CPSS) Executive Director Saeeda Diep and Mufti Raghib Naeemi presented shields and bouquet to the panelists.