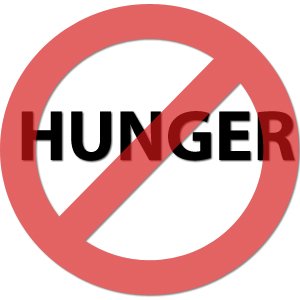 ZERO HUNGER is the second goal of US Sustainable Development Goals. Zero Hunger means no food shortage, improvement in agriculture and nutrition, and to achieve food security. Hunger and malnutrition are one of the major causes of death in the world.
We get food from nature and natural resources. Agriculture sector is concerned with providing us food which is the most basic need to live. World increasing population means now we need more food and resources in order to meet our needs. But we are compromising our natural resources and not reserving these resources for more population in the future. Zero Hunger Goal provides us with solutions of how we make an end to hunger in all over the world.

Food security means efficient access to food resources, improved nutrition and using food resources carefully. Agriculture is considered as the major source of food in the world, it provides about 40% world’s population with food. About 500 Million small farms provide food and this is a common and major source of food security for poor men and women. If women come as farmers as compared to men farmers, hunger will be reduced to 150 Million people. 400 Million People are living without electricity and they compromise on food in order to meet other necessities of life.

Extreme hunger and malnutrition are s a huge barrier in the development of many countries. That’s why these goals are important to achieve if we want to survive in the future. Hunger leads to many health and mental development problems. Every Ninth children die just because of starvation.

Food is the basic need of life and people must have access to it but unfortunately, we are not using natural resources properly and our population is increasing day by day. Zero Hunger means that every person in the world no matter where can get enough food need to spend a healthy life. Climate also has a direct effect on food shortage as disasters like droughts, floods and landslides cause food shortage. In such type of situations, we need to increase our harvest and agriculture quality. Poor food quality causes children not to grow properly. We need huge amount of investment in our agriculture sector. This is not only for the present population of the world but also the additional increasing population.

Now if we look on the facts of world on hunger and malnutrition, we need to think to take proper actions to make an end of hunger. Developing countries are facing more hunger problems all over the world. Every ninth children in the world is undernourished. When we look at sub-continents, according to an estimate Southern Asia and Africa are facing greatest hunger in the world. Half of the deaths of children under age 5 are caused due to malnutrition. In developed countries the ratio of food shortage and deaths is a little bit less than developing countries. In Africa, about 66 Million children go to their classes hungry. Asia has highest percentage of hunger in the world, about two-third as compared to world.

There is also a need to improve women farmers small scale fields as well in order to reduce hunger from the world. This could be happened by giving them proper finance and market. More people will come in agriculture sector. There must be a need to improve farmlands and organic gardens. Many people are totally dependent on agriculture but still they are not getting enough food. Humans can live 30-40 days in drought condition like with hunger. But this could only be possible with proper hydration. Hunger causes malnutrition, starvation, famine, thalassemia, undernourished mental and body development and at last death. Many people are dependent on sea food and forest natural crops to live in far locations of the world. US development goals are working on this to completely reduce hunger from the whole world.

US Sustainable Development Goal Zero Hunger has set some deadlines to make an end of hunger from all over the world. It has decided a limit of time to take proper actions. There would be an end of hunger by 2030 and access to food by everyone at every place. There would be an end to malnutrition by 2030 and especially the focus is under 5 years age children, pregnant women and older people. To increase the productivity of agriculture and farmlands by 2030 and to increase productivity of lands and crops. To maintain sustainable development growth of agriculture and food production systems by 2030 and to improve climate systems, drought, famine, flooding, disasters and weather conditions that are the major cause of hunger. The maintenance of ecosystem, domestic animal, cultivation of seeds and biodiversity in 2020. To increase food producers including women, family farmers. To do this, there would be a need to increase investment and do proper funding in agriculture and food production sector.
Zero Hunger is the second goal of US Development Goals. It means to end hunger, improve agriculture and sustainable food production systems in the world. Every human being should must have access to food in every part of the world. Asia and Africa are at top of the list with more hunger as compared to developed countries. Agriculture, fisheries, farmlands, forests, crops and small-scale farms are the major sources of food production. We also need to control climate changes such as disasters, floods, drought, famine, extreme weather conditions because these destroy our crops, fields and become the cause of food shortage. One reason of food shortage is increasing population. We now need to provide an additional population with food by utilizing our limited resources. That’s why it is difficult, but one thing is that we are not using natural resources in correct proportion.

We also don’t maintain ecosystem and food production systems that is the biggest challenge. US Development Goals has declared to take actions and provide investments to end hunger by 2030. Hunger causes undernourished growth of children, famine, underdevelopment of mind and other death causing diseases. In areas like deserts, millions of people die due to shortage of water and food. The SDGs are working on this goal and would end hunger by 2030.

The writer is a scholar at University of Central Punjab (UCP), Lahore – Pakistan and she can be reached at: [email protected]